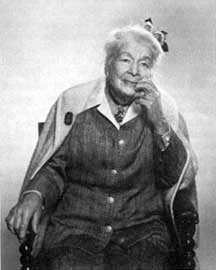 Rolfing is the product of 100 years of study and practice by Dr. Ida P. Rolf and the many people she trained to carry on her work. Ida Rolf lived from 1896 to 1979. As Rolfer Tom Meyers writes, "She was one of those giants of the 20th century whose life spanned the passage from horses to rocket ships, from the fountain pen to the computer. She was described humorously as 'the face that launched a thousand elbows'.”

"This is the gospel of Rolfing: when the body is working properly, the force of gravity can flow through it. Then, spontaneously, the body heals itself."

Ida Rolf earned a Ph.D. in biochemistry from Columbia University in 1916. Somewhere in her scientific research, she made a fundamental discovery about the body: the body can be reshaped even after it's been pulled out of proper alignment for years. She and her followers speculated that this change was accomplished by sculpting and lengthening the fascia, aka the connective tissue, which wraps every structure in the body including each bone, organ, and muscle fiber. Ascribing this role to fascia made sense, because it feels like the tissue melts and becomes silky as the Rolfer is working. But there is another structure which links the whole body and is more likely to be the true explanation for the changes that we see with Rolfing. It's the nervous system.

The nervous system has a link to every aspect of body function: digestion, metabolism, cardiovascular, endocrine, immune system,  vision, sleep, mental clarity, creativity, spirituality, relationships, and so on.

Dr. Rolf's discovery revolutionized thinking about the body. Instead of thinking about muscles and individual parts of the body in isolation, she emphasized the relationship between the parts, including the relationship between the person themselves and the world around them. We call this the bio-psycho-social model, and it's one of the most holistic ways to approach caring for people.

The Role of Gravity

Dr. Rolf recognized that gravity has a profound role in shaping the body. We have to balance our bodies, somehow, against the pull of gravity. From birth to death, gravity is always working on us. Consequently, deviations in the muscle-bone-fascia system are never merely local. Gravity's influence requires adaptions throughout the body. If the natural balance of the body is disturbed, it doesn't follow the best geometry of the skeleton, causing the whole body to gradually change form to adapt to the deviation. For example, after an ankle sprain, limping to avoid pain can cause more trouble than the injury itself, especially if the limp becomes part of the person's everyday gait. Since the body must work against the tug of gravity, the entire muscle and fascial system gradually shifts to compensate for the change. Movement through the pelvis is influenced, as are the patterns of breathing and the position of the head. Because muscles alone cannot carry the additional tension, the fasciae shorten to support the new movement, and, in time, the shape and function of the whole body alters with them.

The human body is like a house. It's structured so that each part has its proper place, and each piece interlocks to balance the load of the others. As in the well-built house whose every post and beam is in place, the body that can move well will tend to continue to  function efficiently. Because gravity pulls down on everything, out-of-place body parts are like beams unsupported by a post, and are pulled into painfully unnatural positions. The Rolfer seeks a return to the original blueprint specifications -- or even better than original!

Dr. Rolf's view of posture led to still another major discovery. It might be called the theory of body geometry.

When an elbow, knee or any other joint is properly balanced, the individual experiences an internal sense of rightness. The body senses that it is aligned along the true planes of movement. The hinges of the legs (hips, knees, ankles, even toes) all work within a single plane. The paths of the legs have parallel courses. The head and spine feel a clear sense of "up." The elbows move naturally through their angle in a smooth course. Compared with this new organization, the previous functioning of the body appears random, even chaotic. In contrast, the new geometry, this new orientation in space, feels much more secure.

This is often compared to hanging from a string emerging from the top of your head, in a perfectly vertical position, and then getting put back down on the ground but keeping that feeling of lightness and length. Putting one piece back into place is usually not enough. Everything should be right before a house can stand or a body can work smoothly.

Naturally, each person has his or her own version of this ideal geometry, which depends on height, length of limbs, and other similar factors. But Rolfers consider five basic points when planning individual goals for a client. In order for the human body to function properly and maintain an upright position, these five landmarks must be in alignment: the ear, the shoulder, the hip, the knee and the ankle. The head, neck and shoulders tell the story of the structure below them. The body should glide along, rather than look as if it has to do extremely hard work with every step. The head and neck must be centered over the middle of the body, and the spine that supports the structure must be at the back of the pelvic section. The spine must then curve in conjunction with the natural back curvature until it enters the base of the skull in a central direction. Any damage or constant pressure will disturb the balance of the upper torso.

One of the major distinctions made by Rolfers is the difference between holding and supporting. As children, most of us are told to "sit up straight." The well-meaning family members who typically make this command are trying to teach us good posture, and by good posture they generally mean some variation of "chest out and shoulders back!" Try this posture right now as you read. Notice that when your shoulders are pulled back: they cannot be supported by the rib cage, that, instead, your trunk is lifted up off the pelvis and held in an uncomfortable imitation of good posture.

While sitting, most of us droop forward and let our bodies hang off our spines in various forms of collapse. When we do remember to "sit up straight," we often reverse everything and hold our chests up and keep the shoulders high and aloft. Some people even become locked in this position. Although they look good to the untrained eye, most trained observers agree that the body structure is not supported from below in this posture; it is uncomfortably held from above. In either case, with the held posture or the collapsed one, energy is being expended. With proper structural support and balance, the body is more efficient, whether it is in motion or at rest in a static posture such as standing.